At 10:35 a.m., Tuckerton Fire-Rescue was dispatched along with Mystic island and West Tuckerton Fire Companies to East Pimlico Road in Mystic Island for a report of a seal trapped on the ice.A joint e...
Read more »
Apparatus
50-00 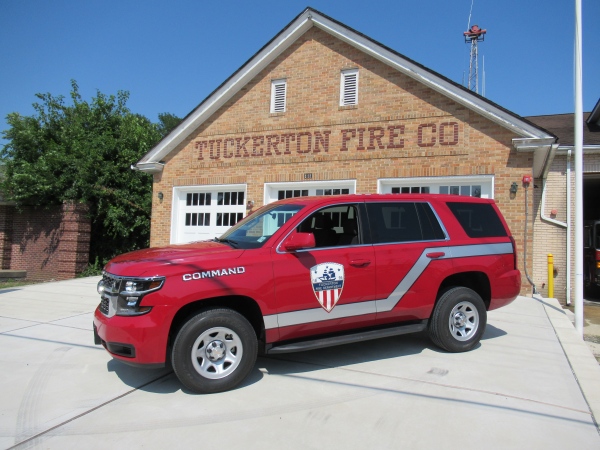 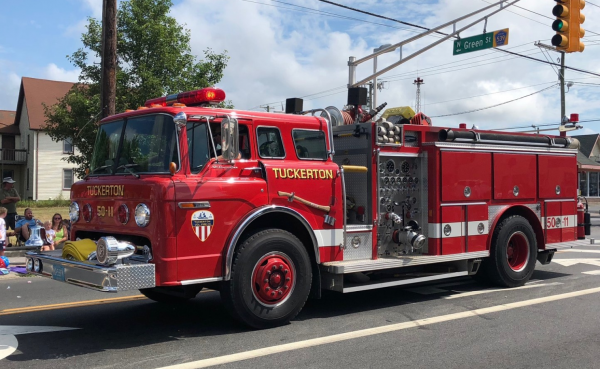 Third out engine, also serves as back-up first out engine and used for flood emergencies if required.
50-21 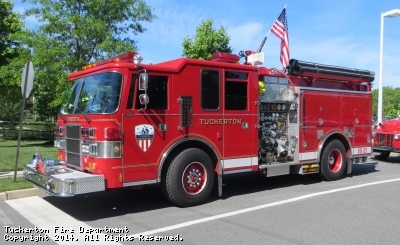 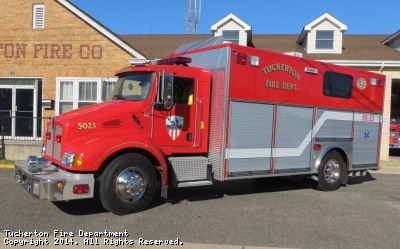 First out for structure fires and fire alarms.
Ambulance 505 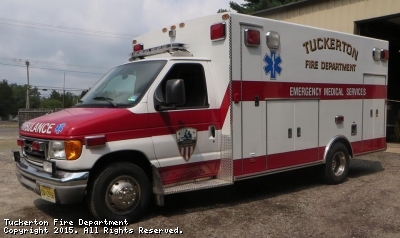 Formerly in service with the Lambertville-New Hope Ambulance and Rescue Squad.
Ambulance 506 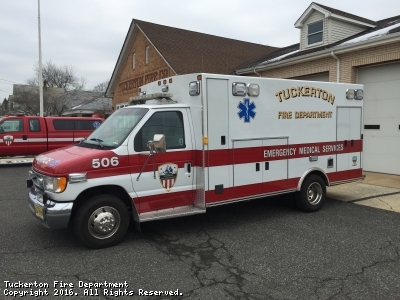 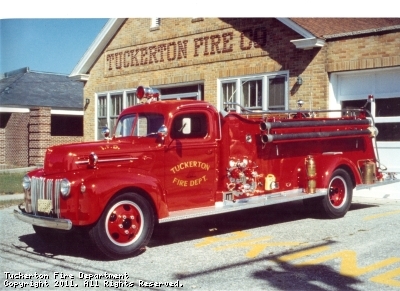 Responded to fire calls until 1985 when replaced.
Still maintained by TFD. Currently used for parade duty and special events.
Engine 774

1939 Chevrolet/ Tuckerton Fire Dept.
Chevrolet Truck chassis purchased by TFD, and assembled by members using the hose body from an earlier Ford Model "T"/Waterous Fire Engine Company engine. An earlier photo shows chemical equipment mounted between the cab and body, then it had a PTO pump mounted, and later a government surplus 500 GPM pump was installed in house.

Replaced in the mid-1960's and sat behind the fire house on North Green St. until the late 80's, Then went to Bob Corliss and sat on his property. In the Spring of 2019, Bob gave it back to the TFD and it is undergoing restoration.
Retired Ambulance 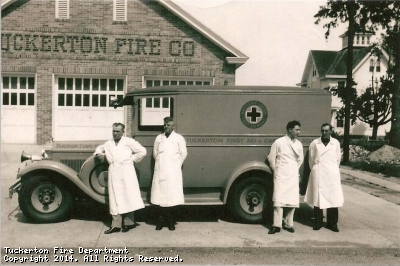 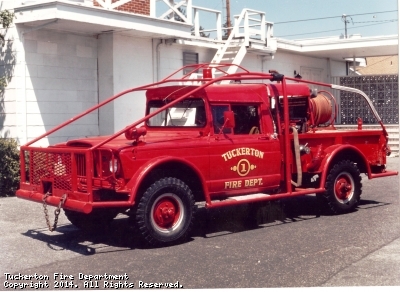 1966 Kaiser/ Tuckerton Fire Department
Originally a military pickup truck obtained through the N.J. Forest Fire Service, this unit was built up as a brush truck and painted by members of the Tuckerton Fire Company in the late 1970's. A surplus 500 GPM Chrysler engine driven pump was installed, as well as a steel tank made and donated by the Viking Yacht Company of New Gretna.
It was removed from service in the eighties due to the excessive weight and lack of garage space.
Last seen in operation at the NJFFS facility in Bass River Twp.
Retired Chemical Wagon 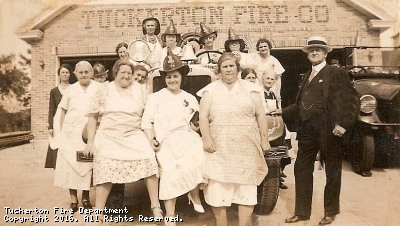 1937 Pierce Arrow
Although the actual year of this vehicle is unknown, in 1937, a friend of the fire department donated a Pierce Arrow touring car. The members of the department mounted four (4) forty (40) gallon chemical tanks and rolled out to fires in style. The vehicle is partially visible to the right in this vintage TFD Ladies Auxiliary photo. This is the only known photograph of this vehicle.
Retired Engine

1920 Ford Model TT/Waterous Fire Engine
Believed to be in service through the 1930's. The chassis was later used to power a saw mill. The fire conversion body was transferred to a 1939 Chevrolet chassis to complete an engine build by TFD members. That engine, along with this body, still exists. It is privately owned in the Tuckerton area in need of restoration. 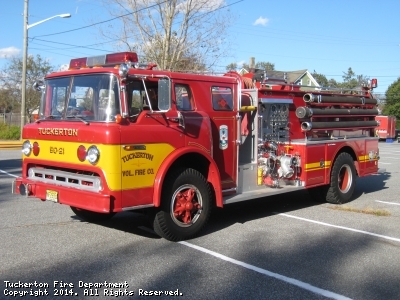 Purchased from Barnegat Light Fire Company in 2009 as a reserve, sold in 2013 to a private collector.
Retired Engine 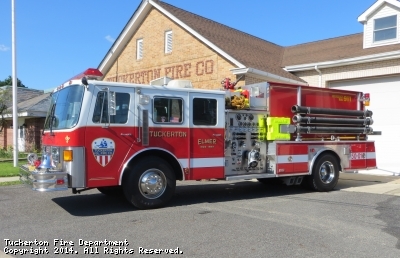 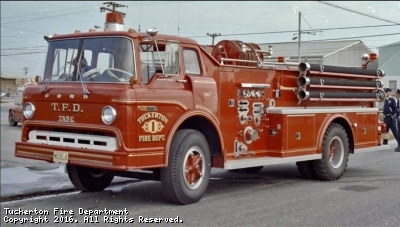 Replaced in 1991, Sold by the Borough of Tuckerton via bid to a dealer. Believed to have gone to Kentucky. 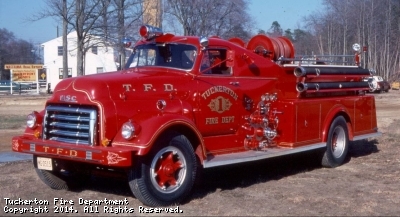 Sold to Barnegat, N.J. Fire Co. in 1986. Was donated to fire department in South Carolina that was devastated by Hurricane Hugo in 1989. Recovered from behind a firehouse in South Santee, South Carolina and brought back to Tuckerton in 2012 in need of restoration. 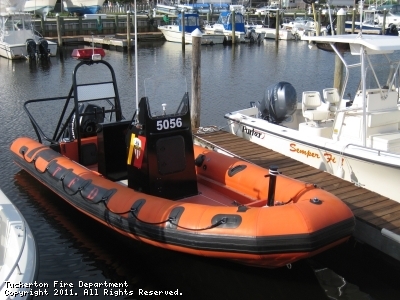 Sold to a private party in 2015.
Retired Hand Drawn Apparatus 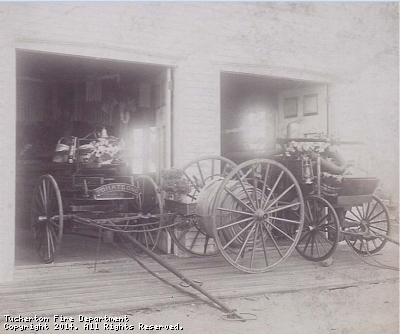 1895 Various
Undated photo of early apparatus in the old firehouse located on the "Mill Dam" across from the lake on what is now known as Route 9.
Ladder wagon on left is lettered "Pohatcong", Two wheel hose cart in the center, and the 1800's Howe Hand Operated pumper is on the right.
Retired Pumper

Stripped of equipment and sold at auction in the 1960's to Joseph Teschko of Mystic Island. Was in Cramer's junkyard, New Gretna in 1969.
Retired Pumper 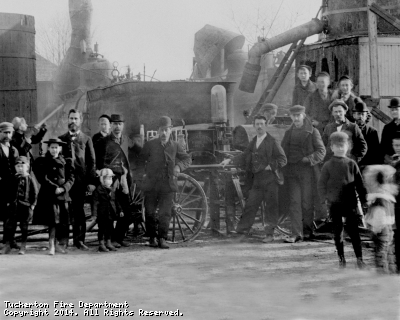 1895 Howe Hand Operated Engine
Unsure of year this engine purchased, or whether new or used. 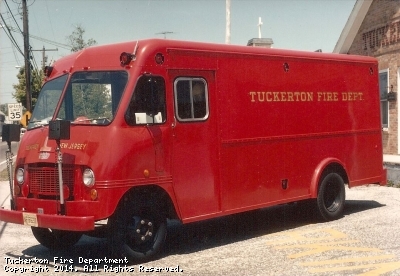 Used to carry turnout gear and other equipment to fire scenes, and had a generator with lighting. Air Packs were later installed, along with a tone encoder for dispatch capability.
Turnout gear was relocated to the firehouse in the 1980's, and this truck was placed out of service in the early 2000's when it was replaced by our current Rescue One/Kenworth rescue/utility vehicle.

Currently owned and in use by Maritime Marina in Tuckerton.
Ocean County Dispatch 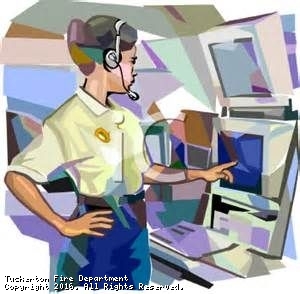