Tuckerton Fire Department responded to a motor vehicle accident on US 9 near the NJ National Guard Armory. The patients were treated on scene by Tuckerton Fire and EMS personnel. One victim was tran...
➜
Fatal Structure Fire with Entrapment
At 10:52 a.m., Tuckerton Fire Department was dispatched to a fire alarm at Village on the Green Apartments Building 3, 500 East Main Street. At 10:56, the tones were again activated for a possible str...
➜
Water/ Ice Rescue- Seal

At 10:35 a.m., Tuckerton Fire-Rescue was dispatched along with Mystic island and West Tuckerton Fire Companies to East Pimlico Road in Mystic Island for a report of a seal trapped on the ice.A joint e...
➜
About us

By February 1895, the Fire Company had purchased its first apparatus. It is believed that the apparatus consisted of a hose wagon, pump, and 500' of hose. Ladders, if required at a fire, were freely loaned by local contractors. In order to have a few ladders for night fires, “Messrs Horner and Stiles kept their ladders in the firehouse.” The pump housed in 1895 was not of modern design for the time. The pump could be hand or horse drawn. It was called the side stroke type, requiring four or more men on each side to move the handles up and down to draw water from the “box” and pressure it into the hose. The “box” was filled by the bucket brigade. As originally built, the engine weighed 1,500 pounds. The wheels were made of hickory and had narrow treads for speed over cobblestone and packed clay roads.
In April of 1895, plans were started to build the first Engine House. The original Engine House was built under the direction of J.W. Edmonds, who was the Superintendent of Construction. The location was to be “on the Mill Dam situated at the lake.” (Site of present day Stewart’s Root Beer) The terms of the land agreement are as follow: “The Fire Company is permitted to use the land between their lot and the tail race of the old Shingle Mill while they desire and it remains unsold, unless circumstances arise which make a continued use inexpedient, when thirty days notice by either party shall terminate the agreement. The consideration for the use of the land is one dollar per year, in lieu of which Mr. Pharo shall have the privilege of housing his gunning box and decoys in the basement of said house.” 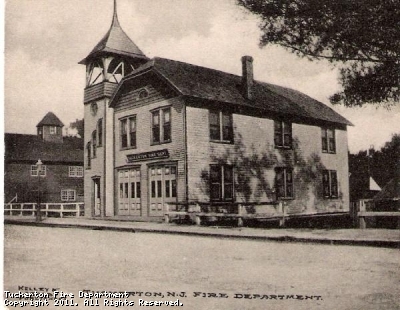 In August 1895, The Tuckerton Fire Company #1 took its first steps to incorporate. Up until this time, the company had no legal status. Hat, caps, and belts were ordered in September of 1895. The caps were ordered for $1.00 each with 5 cents additional for each letter.

The first pieces of equipment placed into service lasted many years. The first motorized, self contained, engine purchased was a 1918. Ford Model T Waterous 250 gpm pumper. This was followed by a 1928 Sanford 500 gpm pumper.

In 1937, a friend of the fire company donated a Pierce Arrow touring car to the company. The members soon mounted four 40 gallon chemical tanks and rolled out to fires in style. In 1939, a Chevrolet with a 200 gpm Darley pump joined the fleet. This engine was built by the membership and retrofitted with the body that once belonged to the 1918 Model T. Next, another Ford, a 1946 Ford Great Eastern with a 500 gpm pump, was added to the fleet.
In 1954, a GMC TASC was delivered to Tuckerton. The unit was equipped with a 750 gallon pump and was eventually donated to the Village of McClellanville, South Carolina after it was devastated by Hurricane Hugo in 1989.

Due to the size and the weight of modern fire apparatus, an addition was built onto the firehouse on North Green Street in the 1950's. The existing Engine Room was converted to the present day meeting hall. This remained until a new Engine Room was constructed in 1994. This site has been viewed 193,988 times.
Calls
News
Events
Pictures
Apparatus
Maintained by the members and staff of Tuckerton Fire Department. Designated trademarks and brands are the property of their respective owners. Copyright © 2006-2022. YourFirstDue Inc. All Rights Reserved. Content on this web site is supplied by Tuckerton Fire Department. YourFirstDue Inc. cannot be held responsible or liable for any content, text, pictures, or any other media found on this web site.
Management login
Powered by